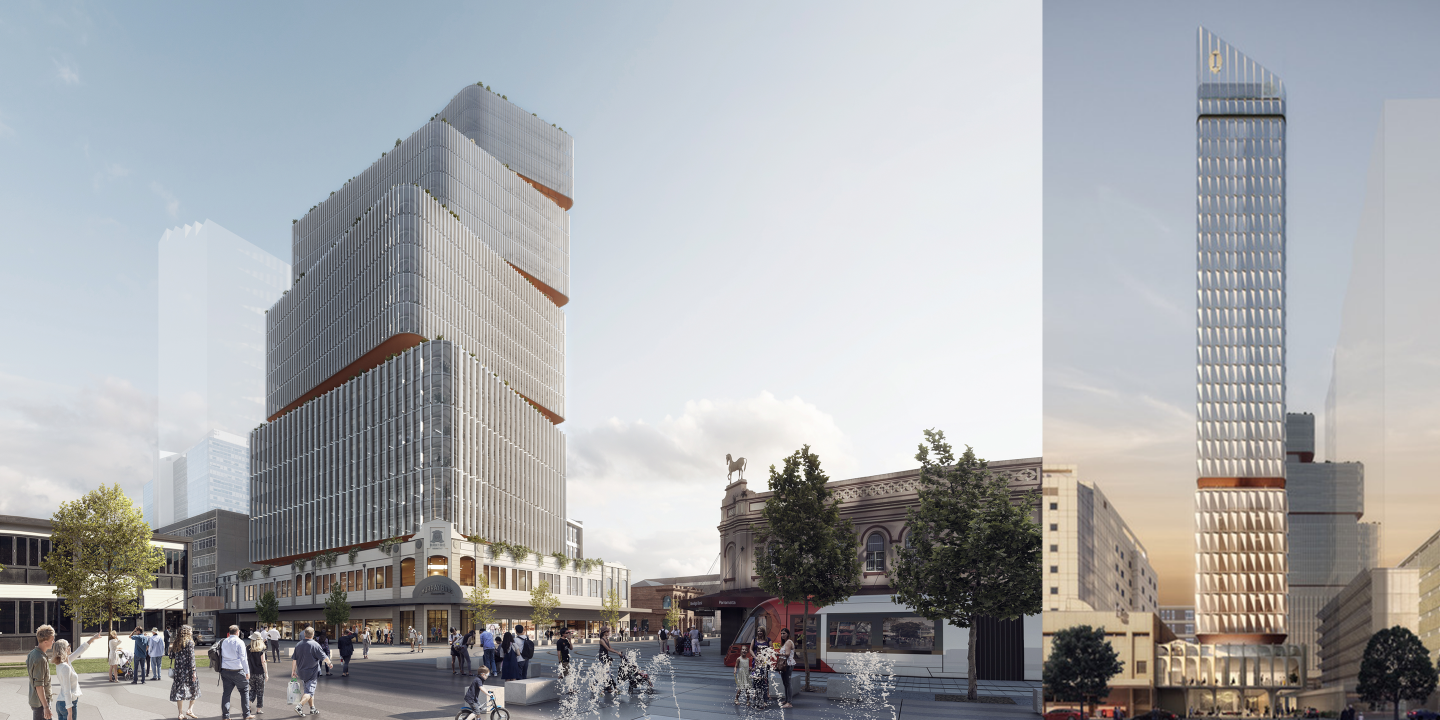 197 Church Street, Parramatta is a Design Excellence Competition win and encompasses a 4,300 sqm site at the heart of the CBD, includes a 32-storey hotel, 25 floors of commercial offices and significant public gathering spaces driven by a design narrative rich in culture.

Parramatta is undergoing a transformational evolution in growth and prosperity in both the private and public sectors which has led to many new developments, and the implementation of a citywide framework plan. The 197 Church Street site sits at the nexus of this new development at the heart of the Parramatta CBD, on one of the city’s most culturally significant intersections.

A site of such importance requires considered design thinking.

Our architectural approach is significantly shaped by conversations with our Indigenous partner, Matthew Fellingham, and what caring for Country means to First Nation peoples.

These conversations, initiated as a first step in our process, revealed opportunities to intrinsically connect the architecture to the land through a design narrative that is rich in culture and heritage.

Our exploration of Indigenous pathways and geomorphological lines through the Parramatta region, and the subsequent colonial layering and urbanisation of the city led us to develop four key conceptual design principles; Travel Lines, the Urban Grid, Layering and Placemaking.

These key conceptual principles drive the design from both a physical - the built form and its adjacencies, and philosophical - the soul and emotive journey, and work together to form a deep connection and sense of place.

This led to a ground-up approach and the creation of a through-link to physically connect the urban block bounded by Marsden, Macquarie and Church Streets - streets with names originating from religious and political history. Missing from this connection was the Indigenous story, and the celebration of the Indigenous culture unique to the Parramatta region, the Burramadigal people.

This resulted in the through-link being named Ngara Nura Way, which means, “listen to Country, learn from Country and to share knowledge”. To honour this philosophical idea and its origins, Indigenous storytelling has been integrated into the space to connect directly to the heart of Parramatta’s Indigenous history and culture, giving gravitas to the conceptual principle of placemaking.

The significance of Parramatta Square historically and geographically, the connection and meaning of the newly created Ngara Nura Way, and the travel lines established through the site drive the articulation of the built form above.

The podium took cues from the historic Murray Bros building and Post Office building arches and fine grain detail, and the opportunity to connect to and celebrate Ngara Nura Way.

The commercial tower above the podium gestures to Parramatta Square in a layered approach, anchoring the significant Church St and Macquarie St intersection, and steps away from Ngara Nura Way to create a visible relief.

The hotel tower, which is tall and slender, addresses Marsden Street and speaks to the commercial tower through common horizontal massing breaks that reflect the program within.

The final layer comes in the form of the façade, which speaks to attributes found in nature, that of dappling light, and the gradual layering of heaviness to lightness. This is reinterpreted using the diminishing density approach, where the façade detail becomes smaller and finer as you move up the towers, capturing light and celebrating height.

Overall, the design proposal will contribute positively to the urban life of the precinct, connect with its rich history, and culture, and align with the transformational evolution in growth and prosperity currently witnessed in Parramatta. 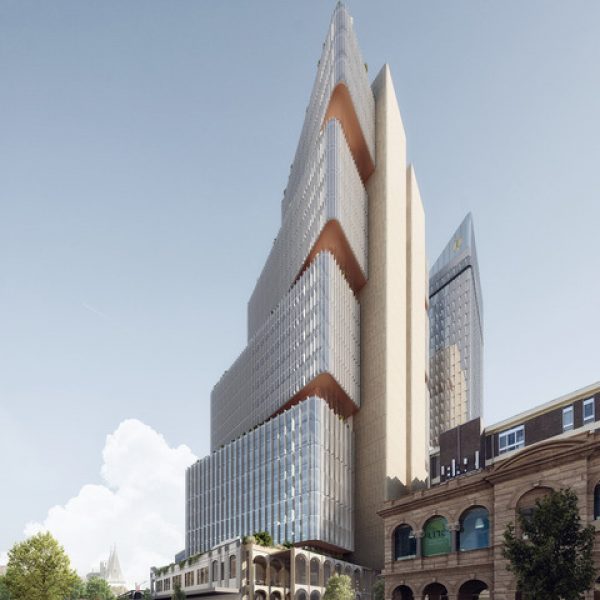 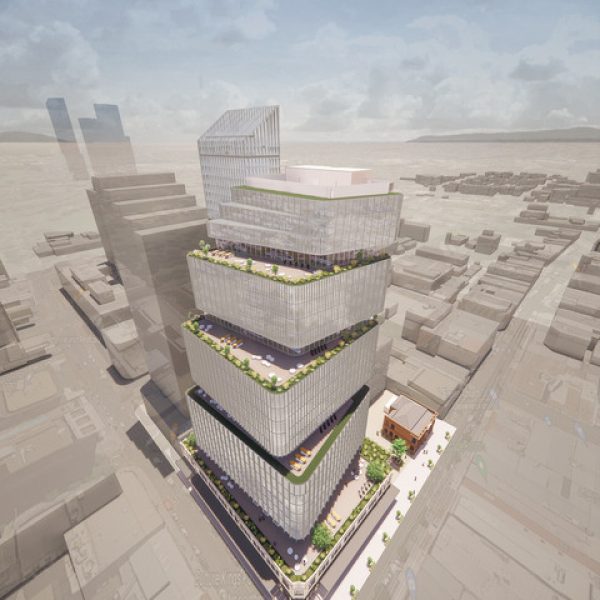 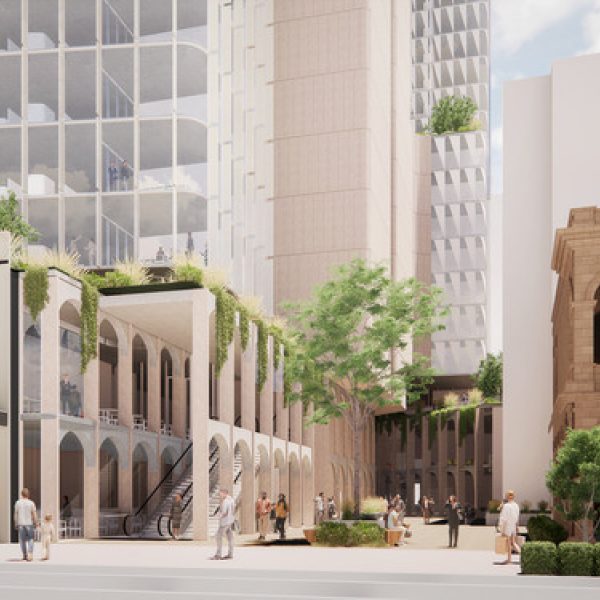 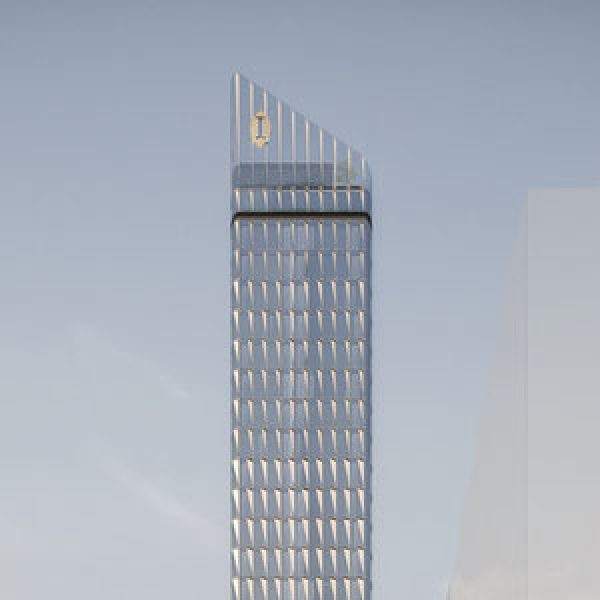 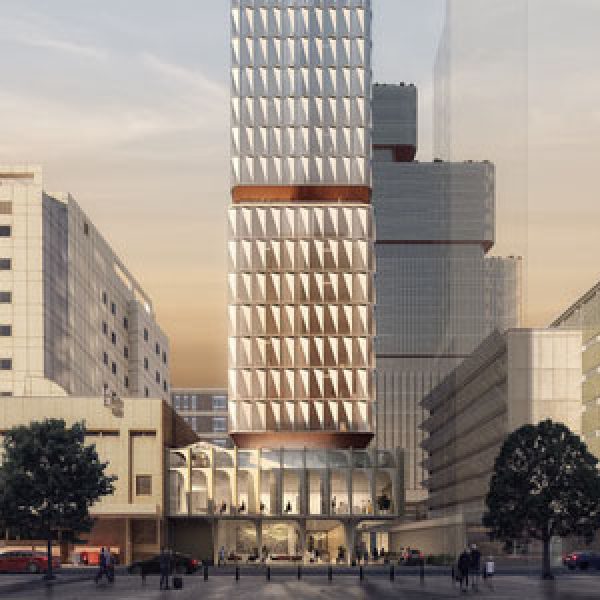 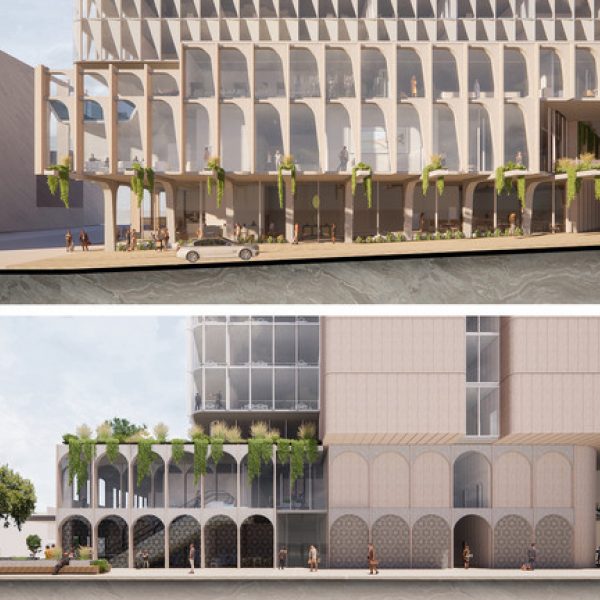 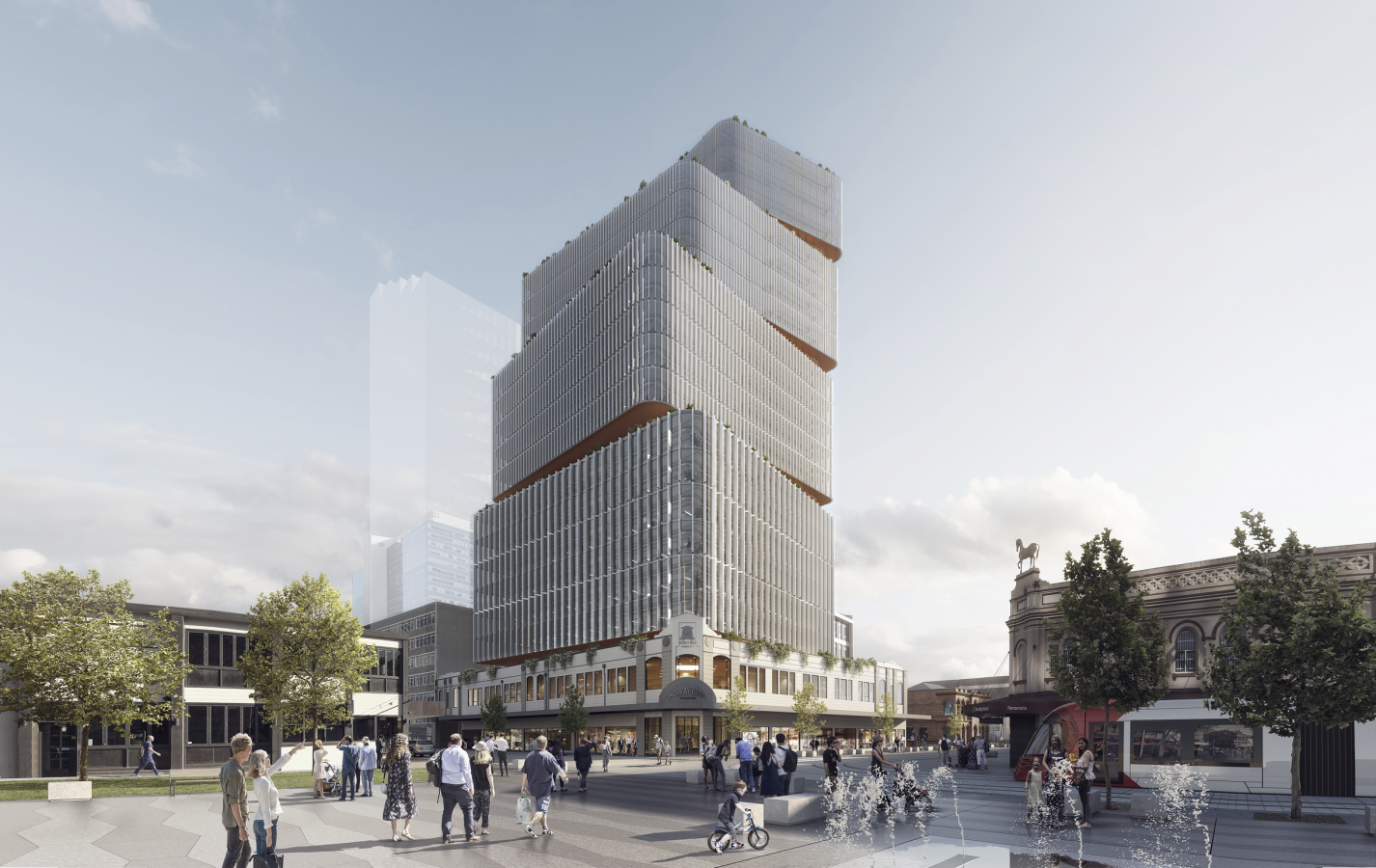 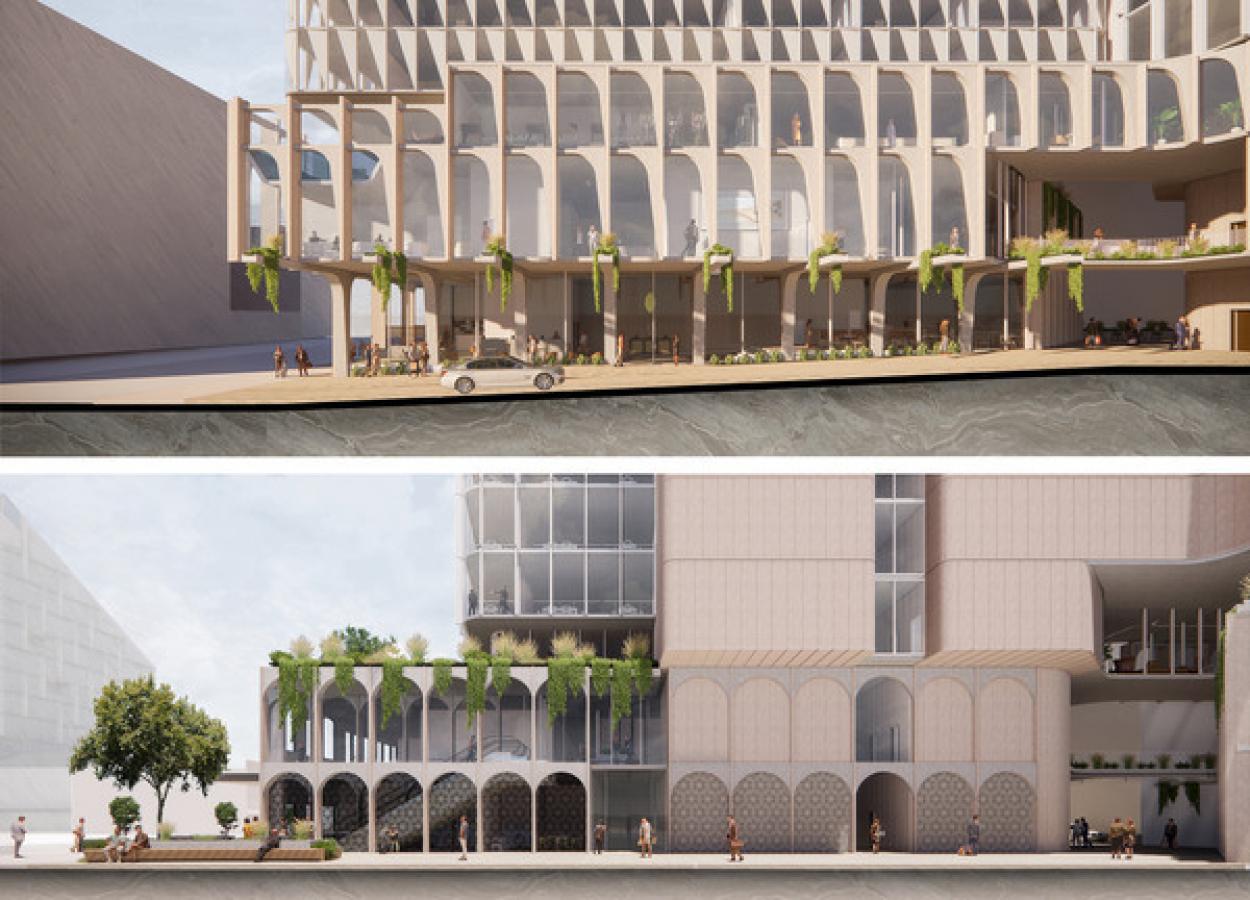 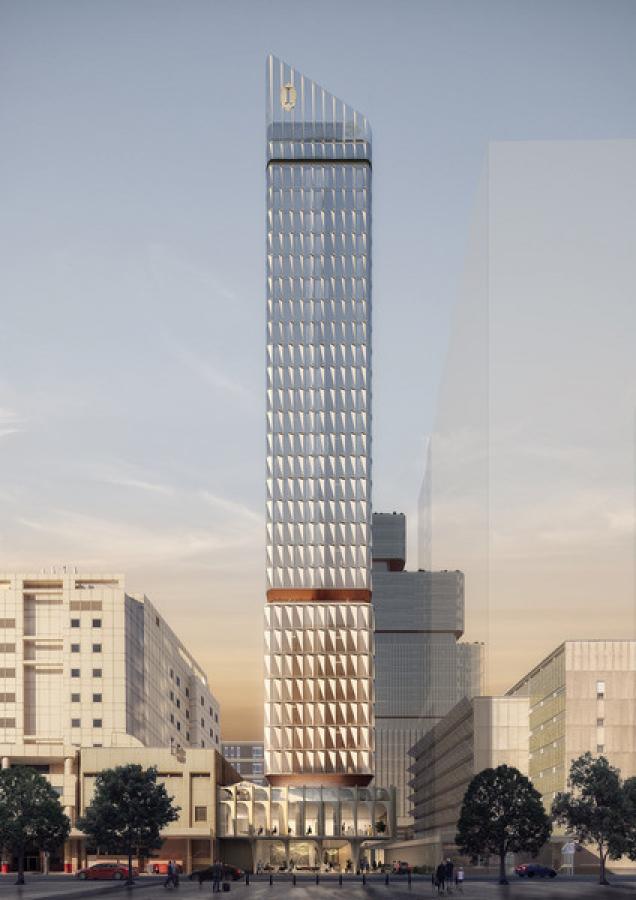 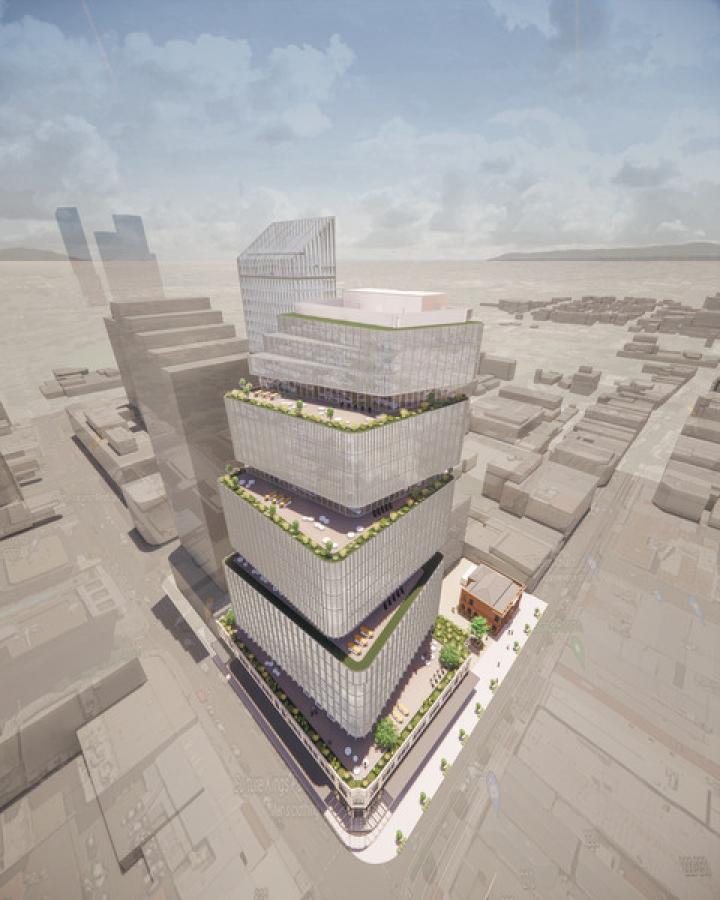 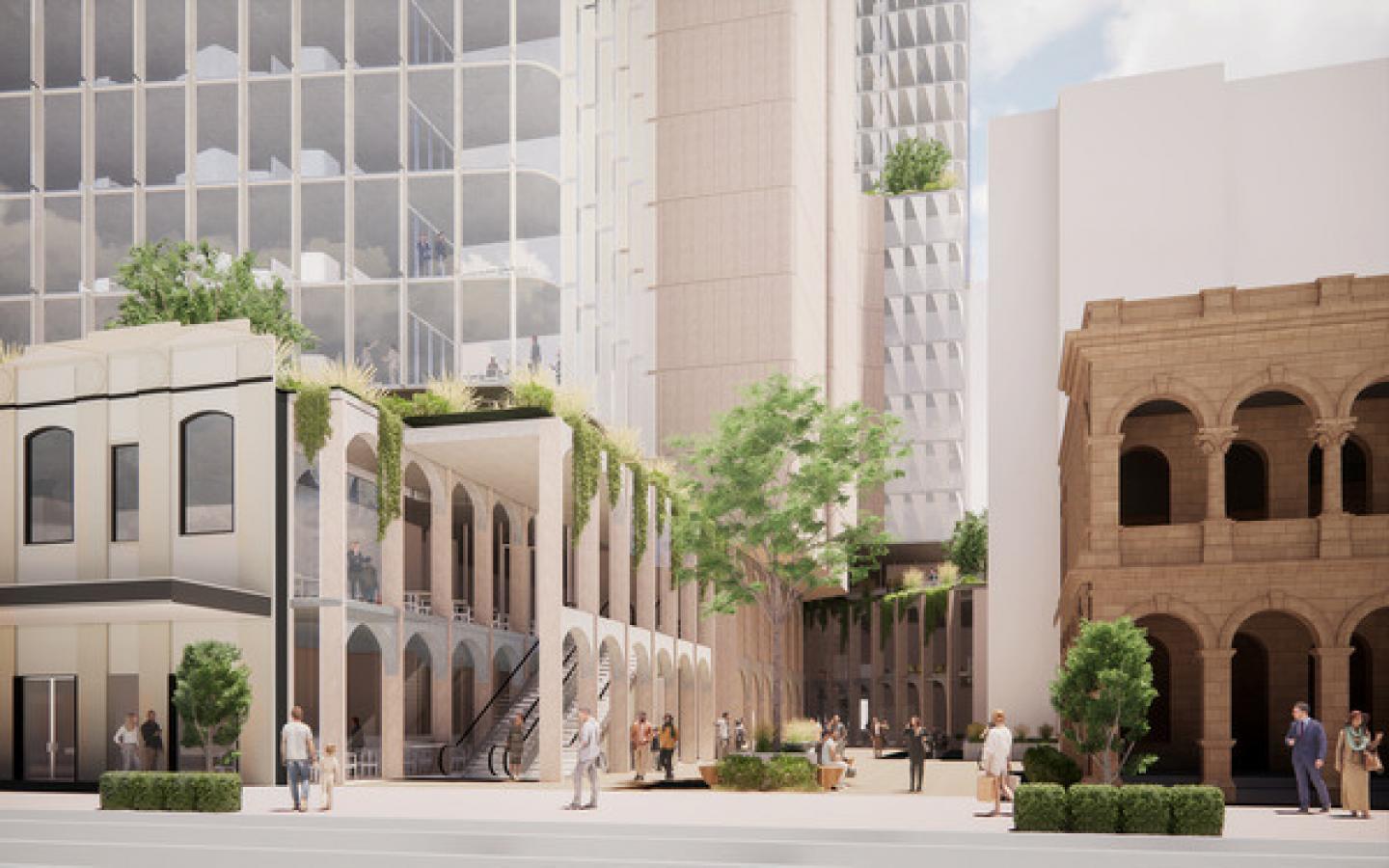 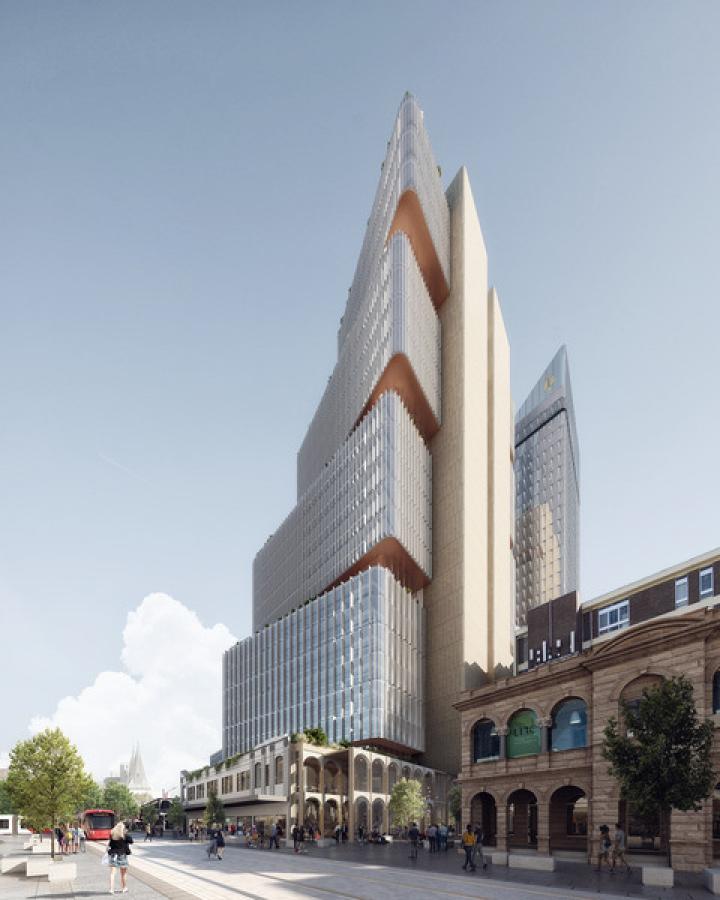 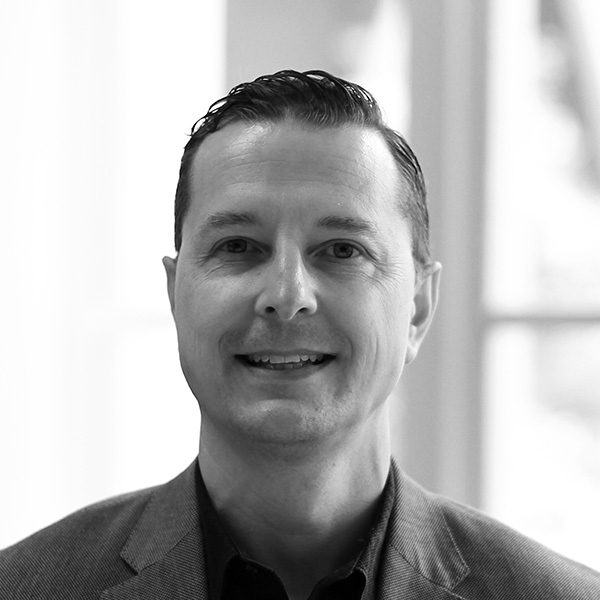 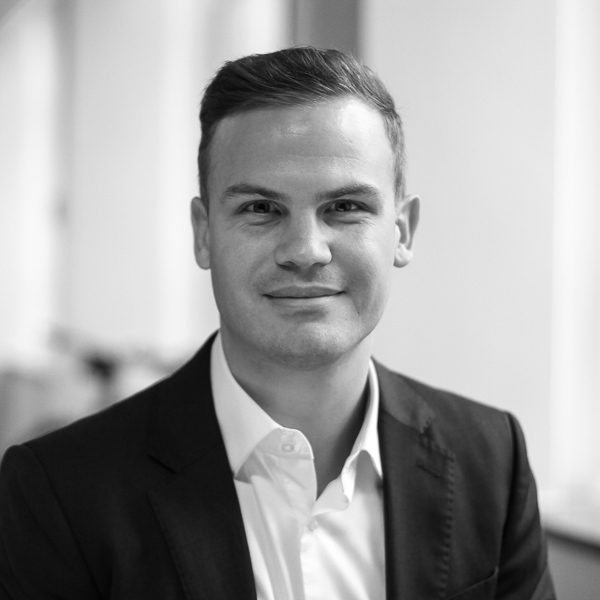 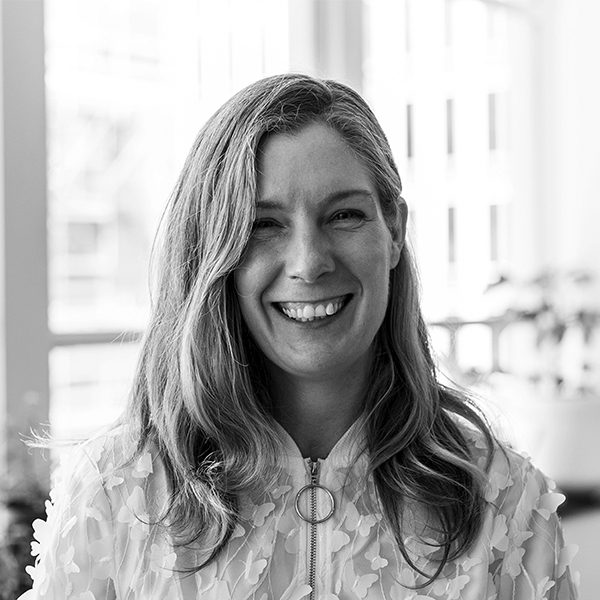 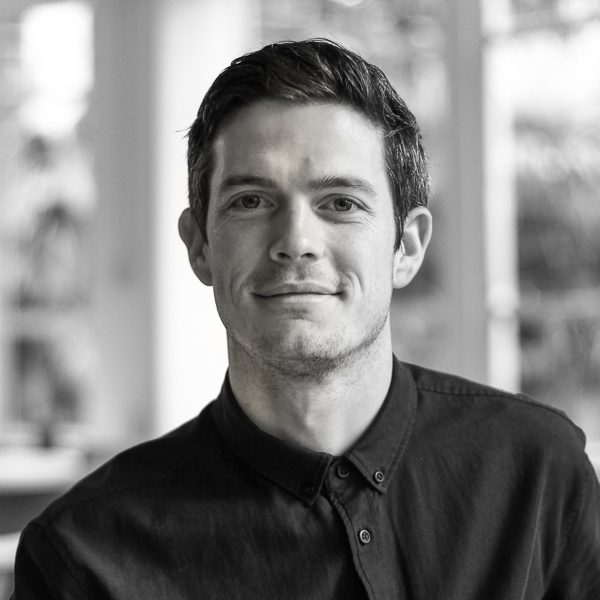 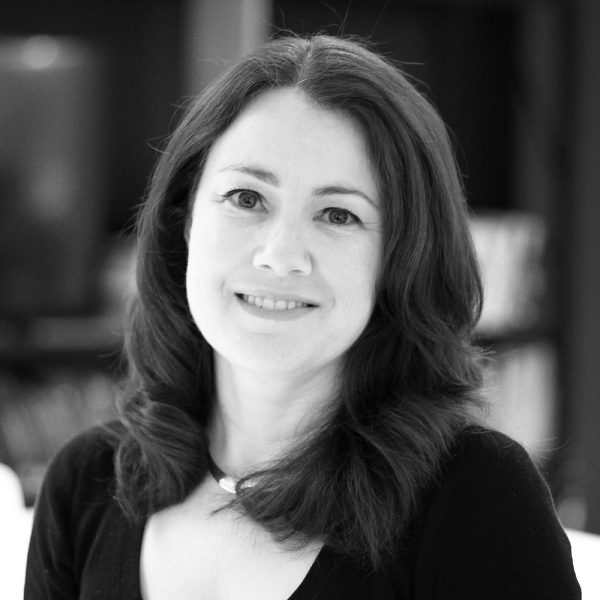 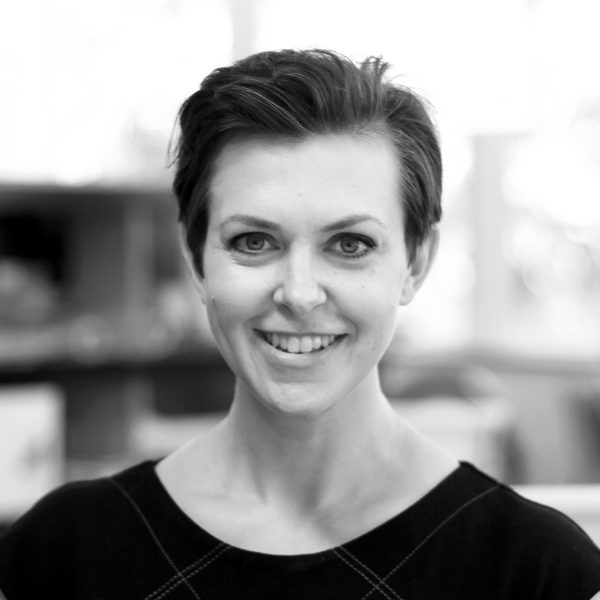 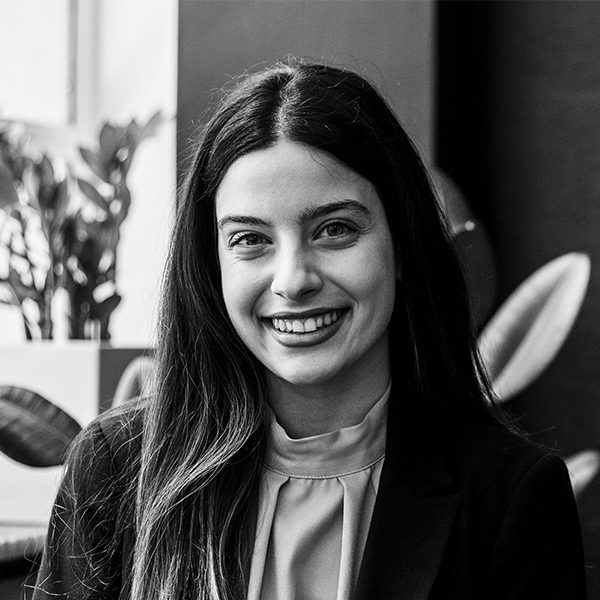 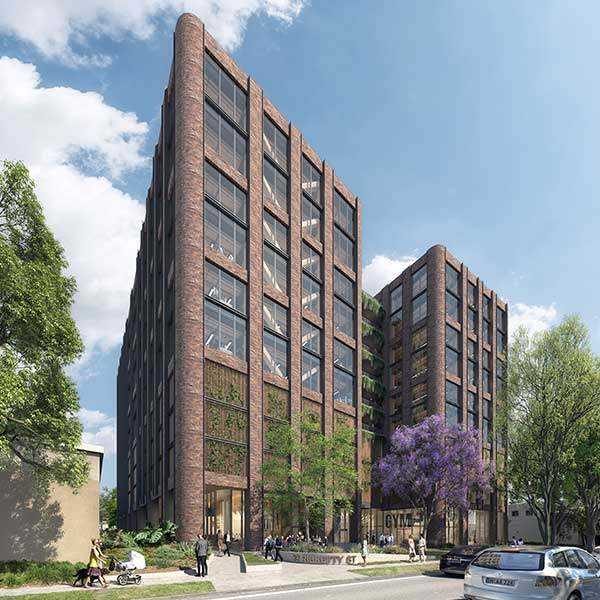 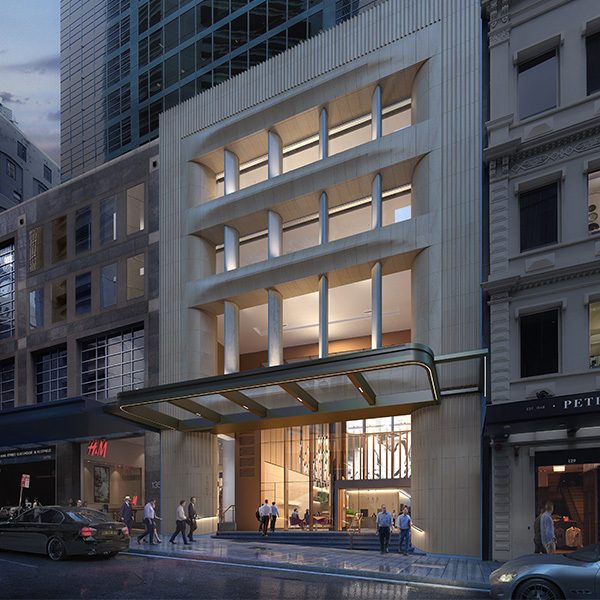 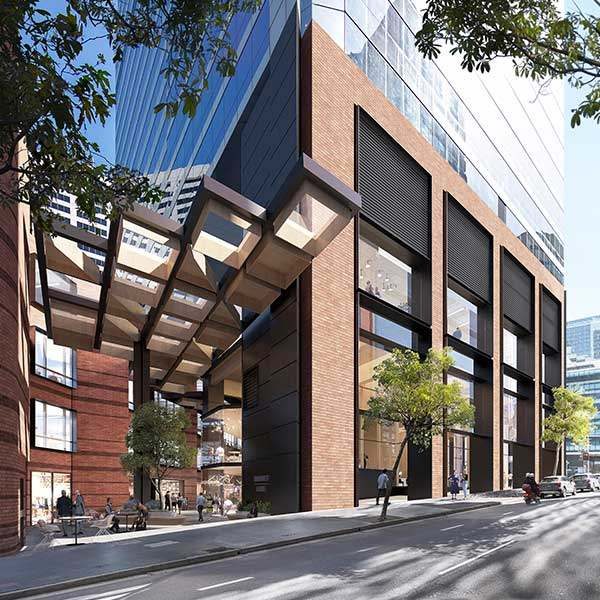 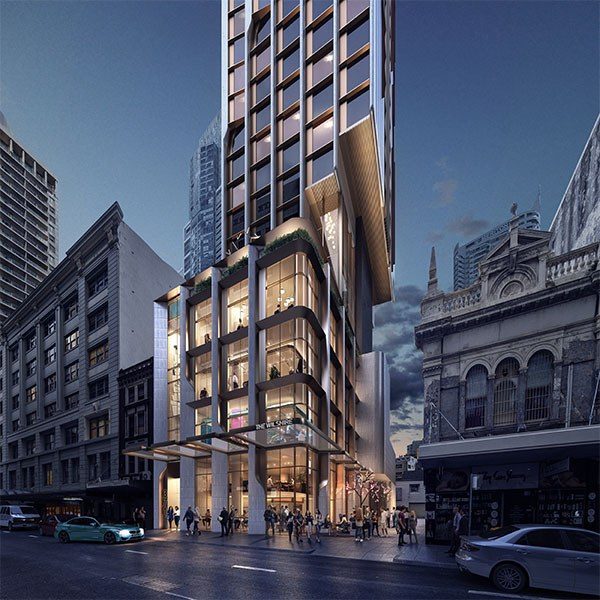 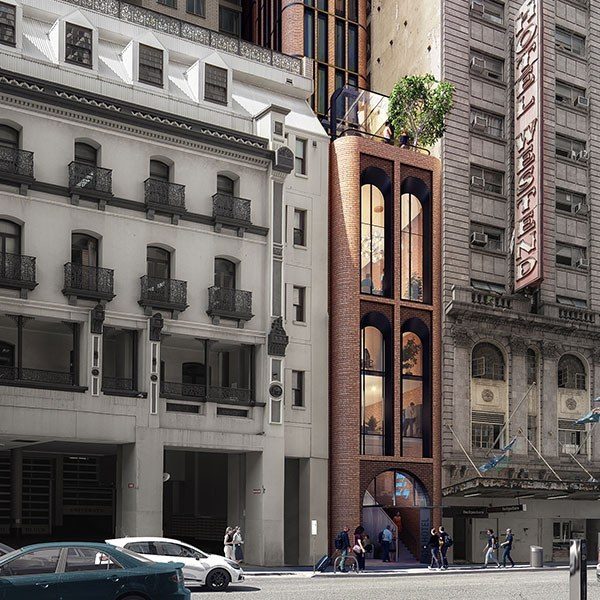 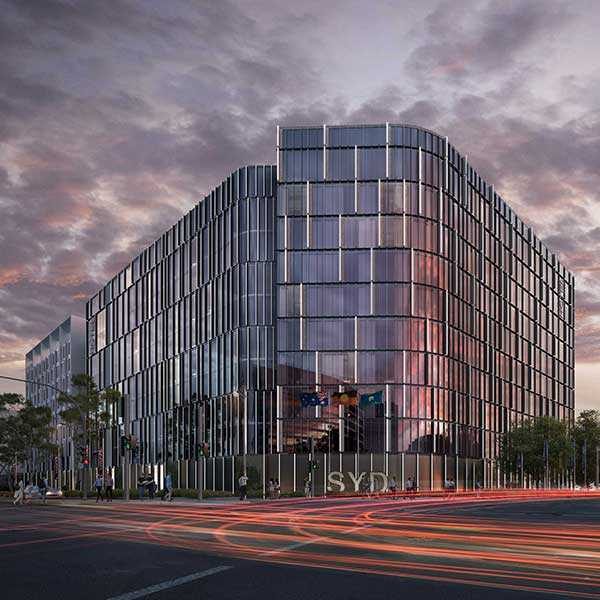