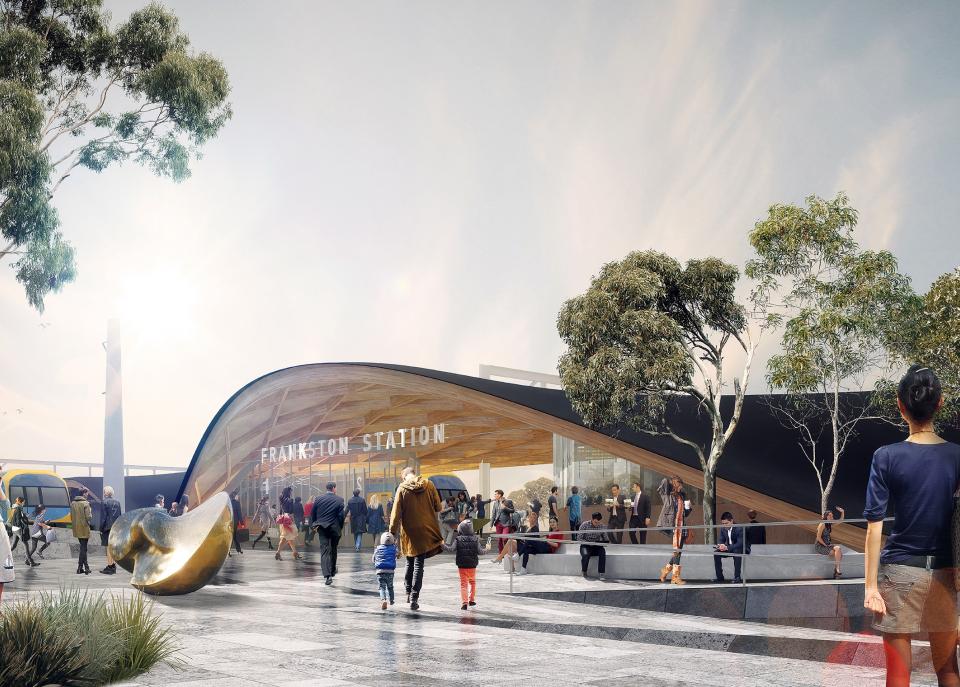 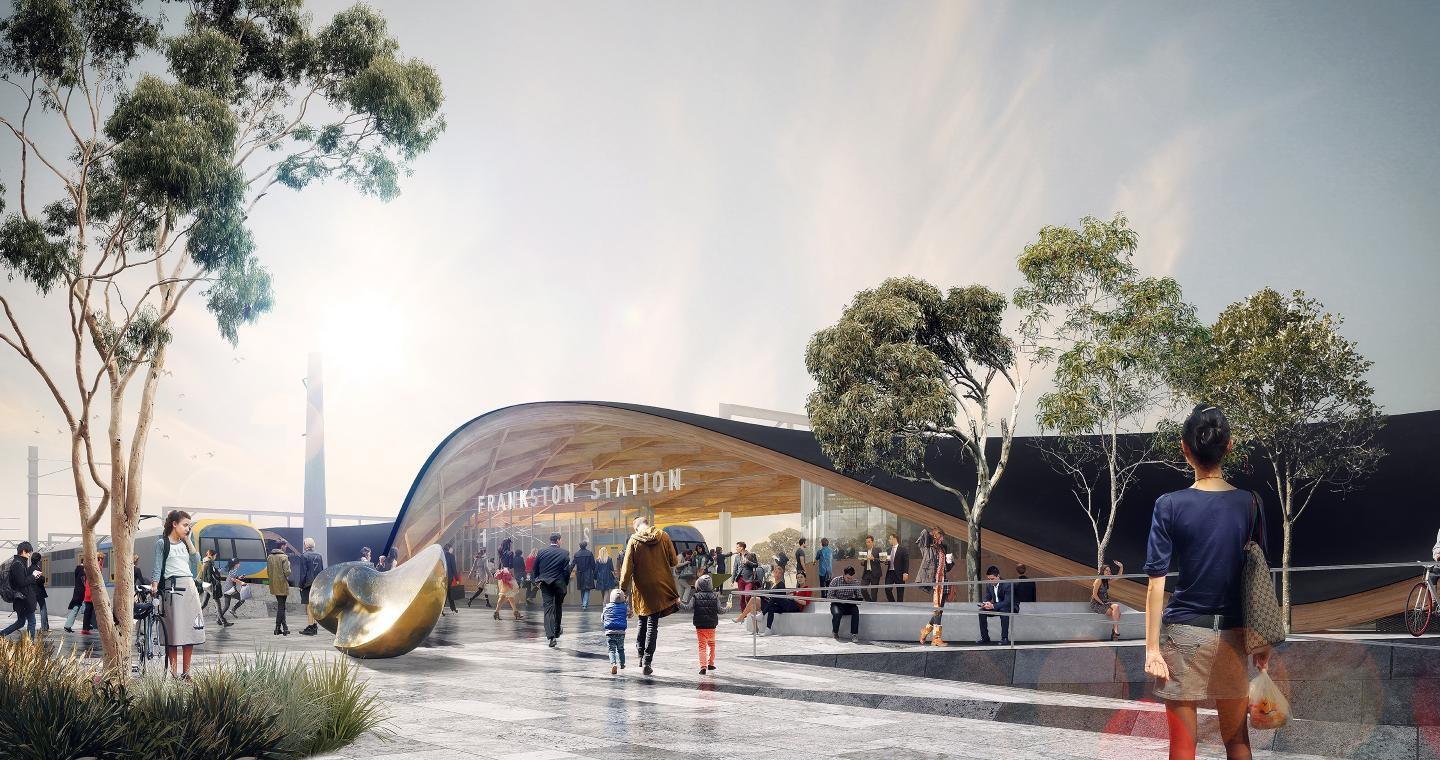 Frankston [Re]United sees the new station as a catalyst and crucial first step in the long-term reclamation of the urban void caused by the current rail infrastructure that separates the city of Frankston in two.

Frankston has a lot of qualities - a beautiful beach, proud community, abundant transport modes and connections, and the seeds of some vibrant streetscapes. But it also has a lot of challenges - vast parking spaces, urban backsides and voids, unsafe places and monofunctionally - making it underperform as a real town centre for the inhabitants of Frankston.

The scheme presented, combines a vibrant chain of new and diverse public spaces and enhanced pedestrian connections with a dramatic yet efficient transportation spine with iconic entry gateway spanning an unblocked Station Street to provide a new identity and focal point for the city.

Building upon existing street alignments, the project constructs a robust urban structure that embraces and unites the twin axes of Wells and Station streets connecting east to west beneath the train-tracks; and north to south along a rejuvenated Young Street to form a pedestrian focussed boulevard. The project provides a solid and robust foundation, as well as a development plan, for re-uniting the CBD with the TAFE and suburbs beyond. Frankston Station will become a gateway to Frankston and the Mornington Peninsula and serve as a catalyst for the prosperous development of the urban centre of Frankston.

Reinforcing the key urban and architectural moves, the landscape design strategy is directed towards the creation of a series of vibrant new public spaces that are connected, yet richly distinct in character and use.

Central to the public domain concept is the focusing of the station entrance at the termination of Station Street, allowing the vista to the station as a central part of the townscape and the direct flow of people to and from the station. The station forecourt is open and accessible providing ample space for circulation with spaces for waiting and meeting provided around the spine of the sculptural seating element, the ‘Frankston Bench’ which becomes a signature element thought out the precinct.

Frankston Terrace is developed around creating an accessible, active and safe central space leading to the station underpass. Through the integration of generous stairs and ramps connecting the underpass to the street, a new public space is defined. The flexible space may be used on a day to day basis to relax and wait for a friend or your train under a shady tree. Food vans and other programmed pop ups will activate the space relevant to the seasons and activities in Frankston – snd sculpting, Waterfront Festival, Ventana Fiesta, sculpture installations and the Christmas Lights Festival.

Frankston Green will become a key public space for Frankston fronting Young Street, terminating the important axis of Wells and Station Streets and enhancing the connection to the east through the enhanced underpass to the east of Frankston. The forecourt will offer a chain of activated spaces for station users and the public of Frankston.

The final space terminates Wells Street against the rail line with the backdrop of a flexible retail pod. This pod may contain an integrated Café and private end of trip bicycle commuter facilities, bicycle maintenance and sales. A public space integrated with the upgraded streetscape works through a continuation of the materiality and forms – lawns, timber decks, planting and shading trees. A flexible space, it will allow for food trucks, markets and city events as well as spill out from the café for outdoor dining for the convenience of locals and commuters alike.

In this space the Frankston Bench will provide an artistic element, permanent seating and ‘play on the way’ linking to the station entry. This space will be further enhanced and activated by any further redevelopment of key sites bounding the station precinct, namely the triangular site to the south earmarked for a possible relocation of the Frankston City Council Chambers.

Victoria’s job market has been significantly affected by the decline of two primary sectors: car manufacturing and coal mining. Victoria’s South-East has already started positioning itself in the emerging forest-industries associated with sustainable construction, specifically engineered timber: Glulam, LVL and CLT. While the region is well versed in the merits of forestry, what is less known is the number of jobs that lie beyond resource extraction and raw processing alone. Namely, the rise of new cottage industries and medium-to-large businesses associated with the fabrication of timber components and buildings. Compellingly, the neighbouring Chisholm TAFE is currently undergoing a significant $45.5 million redevelopment program focussed on the creation of a new Centre for Advanced Manufacturing and Trades. As has been suggested, the construction industry is both a significant contributor to nation’s economy and a prime target for smart-manufacturing.

Given 50% of the construction activity relates to the construction of multi-residential buildings, a paradigm that engineered timber excels in, Frankston is once again well placed to service Melbourne’s timber processing and fabrication needs. From the outset, our design was envisaged as a catalysing demonstration project of advanced timber construction and an exemplar of what is possible within a design-to-production (smart manufacturing) architectural paradigm. 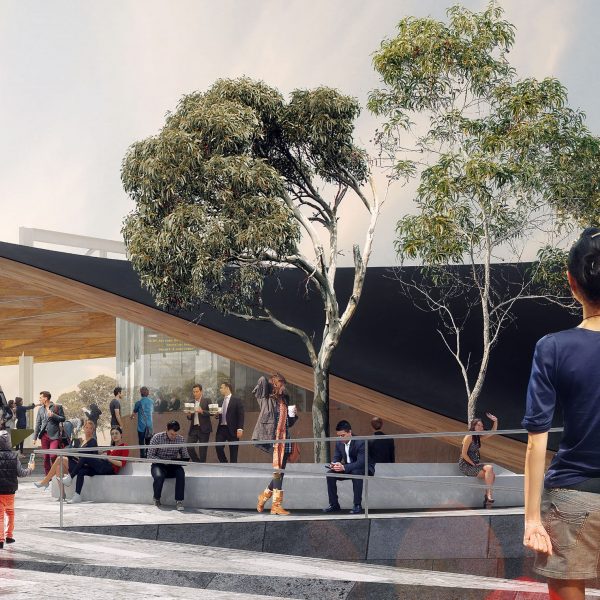 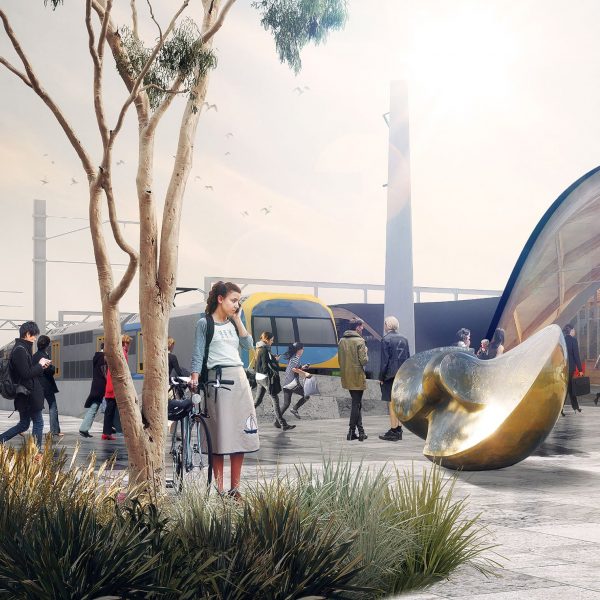